This is the tale of the very first recorded haunted house in Indianapolis, and it was in the 1830’s in the first governor’s mansion built in Indianapolis on The Circle. I happened to find this story in researching old newspapers, and I had to read several different newspapers throughout the year to get the final tale.

But the story goes like this: The house was built for the governor, but no governor ever lived in it because the wives did not want to hang their clothes out on the circle where the monument is today, for all the citizens to look at it. And I don’t blame her. Would you want your husband’s long johns displayed for everybody to look at? So, they refused to live in there. Well, for a time, supreme justices had offices in there, then the first State Library was housed there for a brief period, and Judge Isaac Blackford, who rewrote the Indiana Code, had an office there. After a while, these people moved out, and transients moved in, including ladies of the night. And the house fell vacant for about 30 years and really became a derelict. It was in very bad condition. Well, pretty soon, stories started circulating around that people had seen and heard an entity flitting across the windows. It was headless, they assumed, and was wearing a black cape, because all they could see was this black shape and no head. And they heard it thumping and bumping throughout the building, and every once in a while they would hear strange, garbled screams. So as the stories grew, the citizens refused to go near the circle after dark. Well, one cold November evening, a group of young boys was standing across from this building, daring each other to go over to the building, to at least go in, and maybe capture the ghost.

Well, one young boy by the name of Aaron Ohr said he wasn’t afraid of any old ghost. Well, he had put his foot in his mouth, and he was going to have to go into the house or be called a sissy, a ninny, a fraidy-cat, coward, or all of these things. So his friends kept egging him on, and egging him on. Finally he said he’d go. He checked his sling shot – made sure he had a good pocket full of rocks. And he climbed the steps and went into the house.

Pretty soon his friends heard thumping, and clumping, and banging around in the house, and screaming – Unearthly screams like somebody was being killed, or worse! They were just about ready to leave, when out came Aaron – holding onto the meanest, the ugliest, the really, really nasty, fightin’est, large, wild, really, really wild….. turkey!

And that was really the first recorded haunted house. And until Aaron went in and brought out the turkey, Indianapolis was certain that house was haunted. Well, the Ohr family, because it was close to Thanksgiving, fixed that turkey. It was recorded in the newspaper that it was the largest wild turkey ever caught in Indianapolis, and they fixed a Thanksgiving dinner, and invited all the citizens they knew to come to their house for Thanksgiving dinner to eat the ghost turkey. 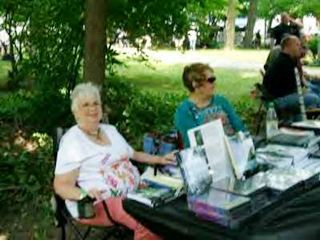