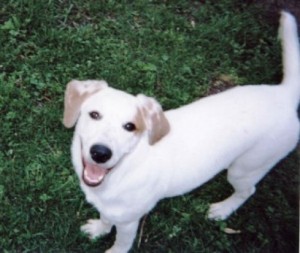 This is Hope, my American Foxhound.  The first day she came to live with me, two years ago, I took this picture.  At that time the vet estimated she was only 3 months old.

She was lost and found by my nephew, Mike, where he worked in another county.  He posted notices and asked around, but no one claimed her.

I had recently lost my beloved Belgian Shepherd, Joy, due to tainted dog food.  Mike decided this puppy and I belonged together.  One evening he brought her to me and of course, it was love at first sight.

She is adorable, smart, and loves to “talk.”  However, she’s still a puppy and, of course, she does “tease” me like all young children do.  I do get frustrated; though the frustration doesn’t last long because she is so sweet and loving

Hope and her favorite toy (2007).  This funny elephant was one of the many toys she found under the Christmas tree.  You can see that she is a much larger puppy.  She has numerous butterscotch freckles all over her body, face and legs.  Unfortunately they don’t show up in this picture.  Today she weighs just under 70 lb. 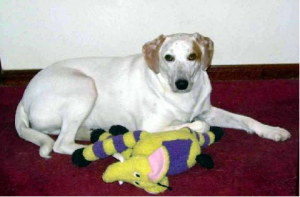 (This is the first in a possible series of stories and events in the life of my 8 month old foxy Foxhound, Hope)

We got up at 3:00 AM. Hope and I were going out the backdoor for a necessary walk when we heard a strange low “huffing” sound. Then through the darkness of the night we saw it! A long slow moving “monster” with glowing “eyes” on its head and outlining its body!!!!!!

I was startled and Hope . . . I think at first she was frightened, but then she went into protective and attack mode.

It appeared the “monster” was going to “float” on down the street and THEN! — it backed up and TURNED INTO OUR ALLEY!!!!!! Perhaps it saw us or more likely heard Hope growling and barking her deepest barks ever. But nonetheless it slowly began “floating” down our alley. What if it stopped just opposite our back door? What would it do? What could we do?

I managed to get Hope back behind the evergreen tree just across from the door where we could hide and the “monster” would not see us. Then I realized whether it saw us or not it would know we were there because of Hope’s barked warnings.

I decided the best “defense” was for us to turn and “run” back into the house, shut and lock the door. Of course, if the “monster” wanted to it could’ve come right through the walls of the house with no effort at all.

I had quite a struggle getting Hope back into the house. By this time she had every muscle in her body on “alert.”  Her determination to face the “monster” was only exceeded by her newly activated strength.

No matter how hard I tugged she was determined to hold her ground. I was equally determined we were going to get back into the house and hide.

I held the back storm door open with my left hand struggling all the while to get Hope inside. My right arm and shoulder were beginning to ache with the effort.

The “monster” continued to make its slow “floating” progress down the alley and then SUDDENLY IT STOPPED!! What if it had changed its mind and was coming back for us? At this point I was able to get Hope in the house, shut and lock the door, and then we made our way back to the bedroom where we huddled together among our blankets.

Though Hope continued to growl and let out strong warning barks the “monster” was quiet. Had it left?

I opened the drapes. Peeking out we could see the “monster” at the end of our lot sitting quietly. Waiting? Then slowly, very slowly it’s back seemed to raise up and amazingly it began to “shed.”

The process was long and stressful for my brave Hope. She tried very hard not to attract attention to us, but she still wanted to warn the “monster” that she was alert and ready for battle.

Finally, the “shedding” process was completed and the monster, minus a huge bulk of its body, left.

Yes, the tow truck had finally disengaged the van it had been carrying.